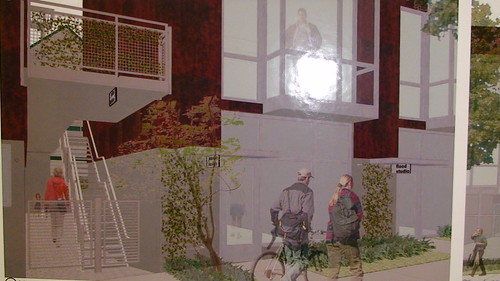 Tonight there was a design review for 1435 34th Ave, at the southwest corner of 34th & Pike where an old adobe gas station currently resides. The owners are proposing to tear down the existing structures and replace them with two buildings containing a total of 6 live/work units. The basic idea is that the living areas are on the second and third floors, and then each unit owns a ground-floor commercial space underneath them. The use of the commercial space seems to be wide open, including everything from small retail stores, to artist workshops or offices for professionals. However, it’s not clear at this point whether that space can be subleased if the owner doesn’t have a commercial use for it.

Environmental sustainability is a major focus for the project. Each unit has access to a green roof deck that will help capture and filter rainwater, even going so far as to strengthen the roof to support a full twelve inches of soil and thus allowing small-scale urban food production. Other parts of the roof will contain solar panels that will power the lighting for common areas. And they’re also planning to build a 50,000 (!) gallon cistern under the courtyard to catch and store rainwater for irrigation and indoor uses such as operating toilets.

The buildings will have a solid presence on the corner, with a nearly solid facade along each street and a lot of airy glass arranged in vertical sections for each unit. Parking is provided inside a courtyard at the rear of the building, giving the it a European feel.

Overall the design board was very complementary to the project. There was some discussion over the need for a canopy over the parking area in the courtyard, but it ended up staying as designed when no consensus could be reached on the issue among the board members. There was also some of the usual talk of materials and a concern over the design of the windows on the northeast corner of the building, but in the end it was approved. But the biggest concern seemed to be financial feasibility, with some board members doubting that the builders will be able to make the building work financially.

There were five people from the neighborhood who were there to see and comment on the designs. The biggest issue, as always, was parking. The developers are actually only required to build a single parking space for this project. But after complaints during the first design review in 2007, they went back and built in a total of five off-street spaces. Here’s what I can’t figure out: we’re supposedly trying to be a green city, gas is at $4 a gallon and heading to $6, and the first thing people get worked up about on new developments is parking, parking, parking. There’s plenty of great cities that have really crappy parking situations, but they still live really well. It’s way past time to be planning for a car-less future around here, so why still all the emotional attachment to expensive, ugly, wasteful parking spaces?

And unlike the last Madrona project, all of the citizens at this meeting were favorably inclined towards the development. I read today that Dominic at The Stranger sees some contradictions between the community reaction to the two projects. Having talked to both groups, I think it comes down to personalities on both sides. The developer of the controversial project has a history of friction with the neighborhood. Evidently he’s pissed people off in the past and that makes them not want to work with him now or give him the benefit of the doubt. But the owner of this latest project is a local artist with close and healthy ties to the community, so he starts off with a lot of good will on his side. And if you look at the two, the impacts really are different. Only a single property to the west is really affected by the 34th & Pike development, and unlike the unpopular project, it’s on the north corner of the block and won’t be putting other neighbors into the shadows. There’s way more people that are directly affected by the 1126 project because its in the middle of the block and uses a small alley for all of its vehicle traffic. I don’t really agree with the opposition to that one, but it’s not hard to see where they’re coming from.

Finally, I spoke to the architect at the end of the meeting, and they’re hoping to apply for building permits this fall and then be able to start construction early next year. 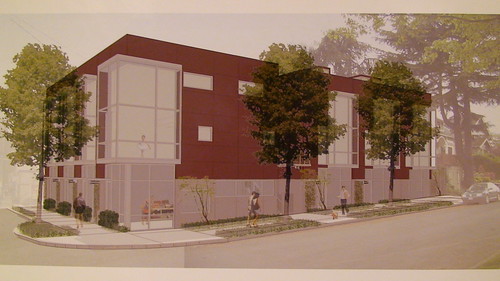 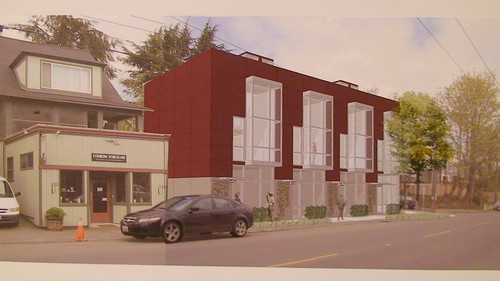 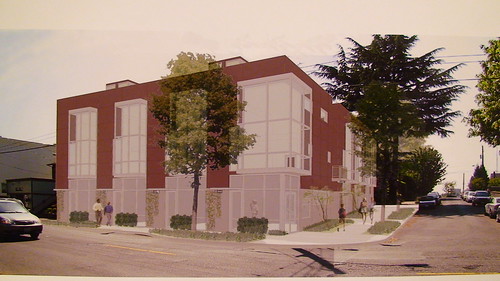 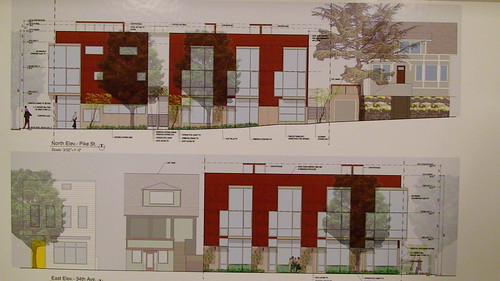