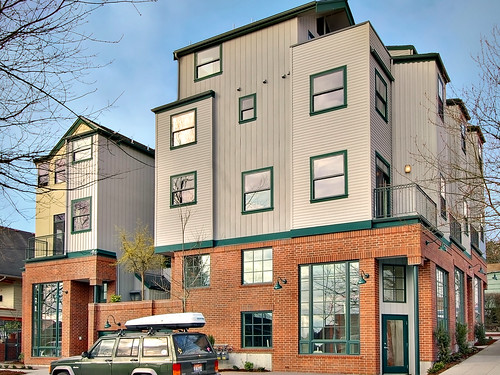 For the last two years (or more) I regularly passed by the southwest corner of 25th Avenue and E Union where a 5-unit mixed use building has been rising from what for years was a vacant “trash magnet” lot and then, for awhile, a deep hole in the ground. And rise from the ground it did. All four stories. And slowly. But the wait appears to be worth it. The finished building makes a handsome eastern “bookend” to the E Union Street pedestrian commercial district that runs from 25th Avenue west across 23rd to 20th Avenue.

The red brick treatment of the street-level commercial story does a nice job of breaking up the verticality of the 4-story facade. The brick imbues the building with a solid quality that says “I plan to be here awhile.” The red brick material and its detailing is something that you normally associate with buildings from a bygone era -like a handful of older buildings within the East Union Street pedestrian-oriented commercial corridor. Indeed, red brick is about the only common architectural thread of the buildings in the corridor, including Key Bank, Thompson’s, the Central Cinema Building, and the building at 23rd and Union that was demolished because of earthquake damage. Come to think of it, red brick would be an excellent choice for the street-level facade of the mixed use building proposed to replace the demolished building at that dominant corner. Red brick used there would extend that common thread and contribute to a solid, “rooted in local history” feeling that the currently sterile 23rd & Union hub surely lacks.

Enough already about facades. It’s the planned use of the 25th & Union building that’s both interesting and exciting for the neighborhood: “Live Above Work”units. Each unit consists of a three-level townhouse-style residence above its own street level commercial space with one underground parking space for the owner. Each of the five units is offered for sale in fee simple title because the property has been shortplatted into five lots (amazingly enough; how did they do that?).

Despite these attributes just one sale is pending, according to the building’s designer and development partner, Randall Spaan. He informed me however that someone has applied for a liquor license to open a wine bar in the commercial space of another unit, the one on 25th Avenue. The applicant is the same team that owns and operates the Bottleneck Lounge on E Madison (across from Crush). The establishment they envision for 25th & Union is the kind of place that people can walk to from home at the end of a long day, have a Grey Goose martini or a glass of wine and a
cheese plate, and unwind with their neighbors. This is the kind of neighborhood development that’s common in European and East Coast cities. How cool would that be for this CD neighborhood?

And other cool uses for the other spaces -services and retail that the neighborhood can really use- hopefully will follow. That is more likely now that all of the commercial spaces on Union Street are immediately available for lease. In response to the currently slow sales market the developer has decided to hold onto the three units on Union Street and lease both the commercial spaces and the townhouses above, either separately or together. All of the residences have 3 bedrooms, a tall loft-style space with exposed wood beam ceilings as the main living space, and three roof decks, including a really large one with for entertaining on the very top floor.

The commercial space of the corner unit is the largest and is tall enough to have a mezzanine level in the back. I was told that it has 680 square feet. The other two spaces each have 483 square feet with 13-foot ceilings. All of them have covered entry porches and oversize windows a few feet from the sidewalk that let in tons of natural light. In sum, each of these makes for
really nice neighorhood commercial space. It will be interesting to see who and what occupy the now completed building and really make it a living, breathing part of the neighborhood.