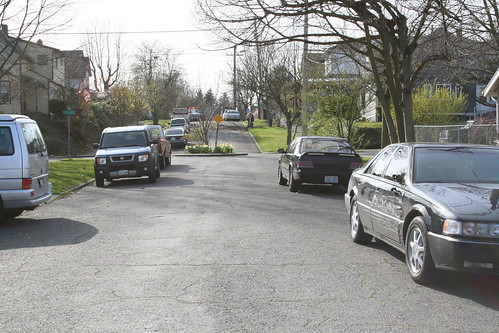 First mentioned in today’s scanner, an out of control driver in a stolen vehicle went tearing up E. Columbia St. this afternoon, side-swiping one parked car and totaling another up the block.

I spoke to a witness who was heading southbound on 23rd when he saw a 4-door Suburu cross 23rd at Columbia, westbound, without stopping and going “at least 50 miles per hour.” The witness had to slam on his breaks to avoid a major collision in the intersection. Other witnesses said they saw the vehicle side-swipe a black Cadillac parked in the 2200 block of E. Columbia, fishtailing as it continued up the hill, until it had a head-on collision with a gray Chrysler LeBaron parked on E. Columbia between 21st & 22nd. A third witness said the vehicle was traveling so fast he could barely comprehend what it was, saying it just went by in a flash of red.

The driver and passenger quickly jumped out of the car and went southbound on 21st, where they evidently saw a friend who offered them an escape in a red Blazer SUV. One of the suspects ditched a handgun into a yard on the street before getting into the getaway vehicle.

The short, stocky suspect in the case was seen with a bad limp as he left the scene. The thought at the time was that it was a result of the impact in the crash, but now it appears that it may be from a gunshot wound. And that may be the root cause of the whole incident: kid shot somewhere east of 23rd, they take off in a panic in their stolen Suburu, and end up wrecking a few blocks away.

The descriptions of the suspects seemed to ring a bell with police at the scene, with one remarking that it sounded like “some kids that hang out at 28th & Jackson”.

The lucky thing here is that no one was hurt. A pedestrian could have easily been killed if they had been on the street at the time, and it could have caused a catastrophic wreck with other vehicles at any of the 2 intersections they breezed through.

But other than property damage, the real casualty may be the job of the owner of the parked car that took the brunt of the final collision. She told me that she had just gotten her “dream job”, but it requires a lengthy commute up north of the city. Her old LeBaron, built on her father’s birthday and originally owned by her mother who recently passed away, was her only means of getting there. Now she’s not sure if she’ll be able to find another way to get to the job and keep it. 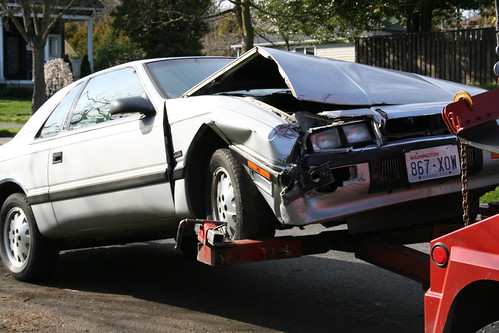 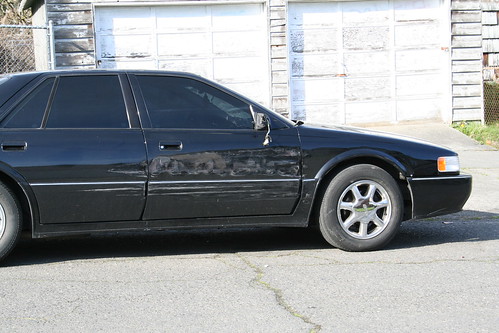