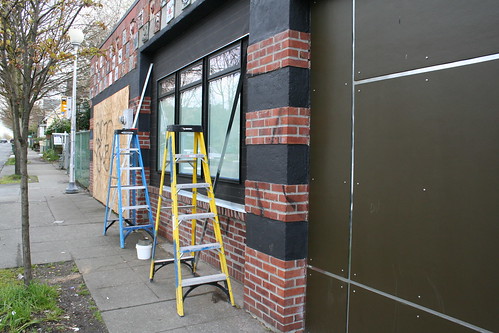 I just went for a walk and got some more information about the former Dilettante store at 23rd and Cherry, right near Garfield High School and the Community Center. Work there has been going on for the past couple of weeks, and it’s had plenty of people in the area wondering what might be moving in.

I talked with Jim Barger today, who’s heading up the project. He’s with Greenleaf Construction, a local company that prides itself on “green” construction (www.greenleafconst.net), especially in Seattle’s urban neighborhoods. Jim says they’re excited about the potential of the 4,000-square foot building, which can be parcelled off for up to three businesses. They would like a retail shop or possibly two to set up there. So far there are no tenants signed on.

Jim says part of the problem has been that the space was so dark and dingy that prospective clients couldn’t visualize the potential. Workers are now opening the place up and adding light and renovations to dramatically improve the appearance. A restaurant nearly agreed to move in, but when the deadly shooting happened a few months ago at the Philly Cheesesteak restaurant down at 23rd and Union, he says the eatery got cold feet and backed off. A non-profit has also showed some interest.

Jim says he’s hopeful that this “prime real estate” will find the tenants it deserves, especially with all the improvements at the high school and area in general. Also: Keep close watch on the exterior. They say want to keep the architecture of the building in tact, and find ways to minimize all the “tagging” that goes on.

I’ll keep tabs on what’s next. And cross our fingers for a cool espresso joint!