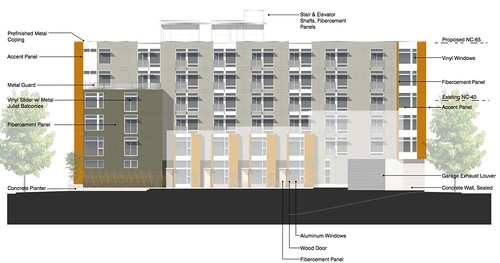 It’s been a long process for developer James Mueller and his plan to replace a vacant lot eyesore with a new six-story building at the corner of 23rd & Union. There’s been a series of design reviews on the project, with the last one being for naught due to a lack of a quorum on the review board. But finally last night the project was able to pass the design review threshold, with the board voting to recommend the project to the city.

It wasn’t without some reservations. Board members were still not completely happy with the choice of building materials. The rising cost of construction has forced a downgrade from what was originally proposed, and now the exterior of the building will be clad in painted fiber-cement panels. But, the architect stressed that these ain’t your mamma’s nasty old cement panels, but an upgraded commercial version that’s just becoming available, featuring a better ability to retain sharp edges and an an overall cleaner look.

The overall plan for the building remains the same: 5 stories of market-rate studio and 1-bedroom apartments (appox $1200 – $2000 per month) and two ground floor retail spaces. The larger retail space is on the northeast corner, with a solid bank of windows facing both streets and plenty of room for a good restaurant. The smaller retail spot is on the northwest corner, sized more for a coffee shop of a small pub. The entrance to the underground parking garage is on the southeast corner, opening onto 23rd (“auto-oriented use on the auto-oriented roadway” according to the architect).

The west side of the building, facing the much smaller 22nd Ave and the single-family houses along that street, will feature a row of apartments with individual entrances at ground level. It looks like that will provide a nice transition to the neighborhood, and integrate much better with those neighbors that other designs might have. The rear side, facing south, will also have 4 units with private ground-floor entrances and some outdoor amenity space.

Note that there’s still one big hurdle for the project: city council approval for the rezone to a 65 foot height. And there’s clearly still a subset of community members that are opposed to that rezone. One was particularly outspoken at the meeting, asking what the community was getting back as a concession for the extra height on the project.

But to me, the fact that we’re getting a nice building on a problematic corner is more than enough of a value to the community in exchange for the extra height. A big portion of the cost of these kinds of projects is the below-ground parking structure. The extra units on top is what makes the rest of the building pencil out. And sure the developer will be making a profit off that height, but without it there’s not really a way to do anything other than a cheap one or two-story building with a ground-floor parking lot. But the overall formula is pretty straight-forward: a good developer with a lot of ties to the community makes a reasonable profit, and we in the community get some nice new retail and a bunch of new neighbors to help keep watch over that intersection.

And in a perfect world, I’d agree with the desire for a higher quality exterior on the building. The old Coleman building that used to stand on that site, before the Nisqually quake, was a classic brick building, even in its dilapidated and Nader campaign-hosting state. But in the end I’d rather have new retail and 90 new residents on that corner than holding out for absolute excellence.

For those of you who want to influence the decision on the rezoning request, it’s not really clear how to do that. Evidently whole deal is in the hands of the city council, and their action in rezones is “semi-judicial”, so they can’t listen to community input. If anyone has ideas please speak up below. 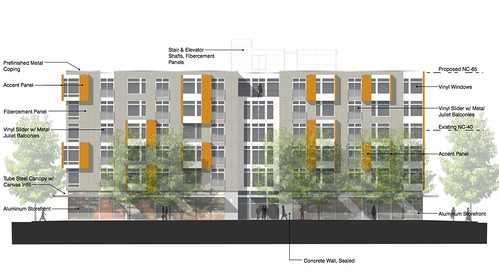 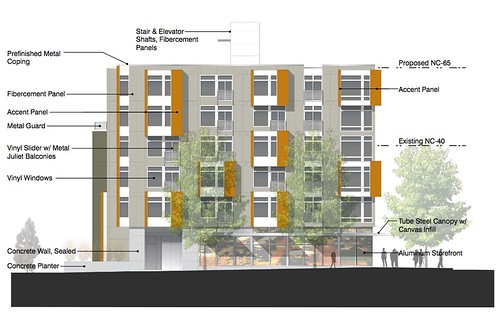 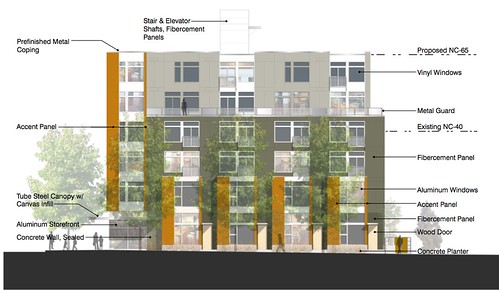