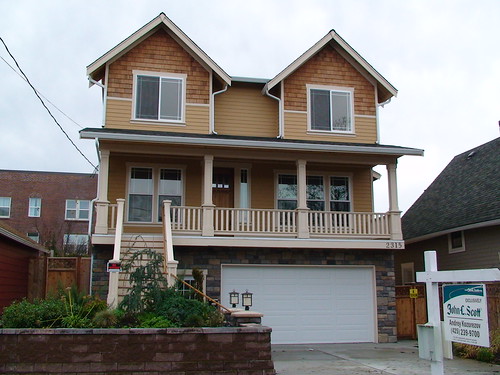 If you’ve lived in the CD for a reasonable period of time, you’ve likely been watching in amazement as housing prices climbed skyward. Houses that would have gone for $100,000 in the mid-nineties now sell for anywhere between $450,000 to $750,000. And even though the Seattle area has so far defied the price declines that are happening all over the rest of the country, I’ve recently noticed what I think is a trend in this neighborhood: houses priced over $600,000 are much harder to sell.

Here’s some anecdotal examples from my own area:
1. 820 21st Ave – This is new construction that replaced an empty, blackberry-filled lot on a relatively quiet block. Although I’ve got issues with its fake Seattle-Box Style and unfriendly front-yard fence, it appears to be well-built and the interior looks nice enough. And, its location gives it a bit of a view of the Cascades from the rear of the house. However, priced at $879,000, it’s been on the market for most of 2007. Note that according to Zillow, the average value of neighboring houses is $460,000, making this new house a full $400,000 more expensive than surrounding properties.

2. 824 21st Ave – $643,000 – This is an extensive remodel that is just to the north of the first house. It was a long-time rental that was in very poor shape until a developer came in and did a top-to-bottom remodel way back in 2005. And with the exception of the vinyl siding they did a decent job fixing it upl. If I remember correctly, it was originally listed for around $750,000, but has since changed hands and is currently listed at a $180,000 premium over the value of its neighbors.

3. 2315 E Columbia – $995,950 – We’ve mentioned this property before. It is new construction that replaced a tiny one-story flat-roofed house with a history of crime problems. And of course its still on the market and will pass the one-year mark in April.

We’ll be watching prices in 2008 to see how the neighborhood weathers the overall economic downturn. Stay tuned…

0 thoughts on “Priced to Not Move”