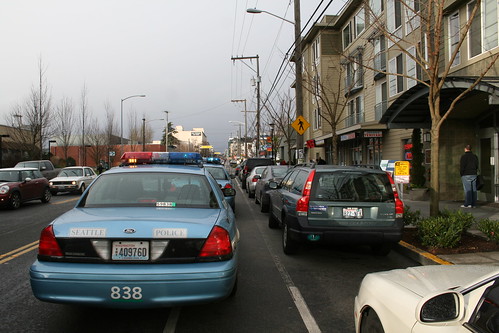 I was just out in the 800 block of 12th Ave, across from Seattle U, where police took a woman into custody. We had some information this morning that police were looking for a second vehicle that had some connection to yesterday’s shootings. However, police would not confirm that or release any information related to it. At around 3:45pm we heard on the scanner that a police unit had seen that vehicle driving on 12th, turned around, and then found it to be parked and unoccupied.

When I arrived I saw three officers gathering outside of a hair salon, and saw them go in with guns drawn. They later exited with a black female, mid-20s, in handcuffs. She was taken away by officers in a patrol car.

I just spoke to Mark Jamieson from Seattle Police, who could only confirm that she is not a suspect in the case, but that she was “detained” and is “part of the investigation.” He’s trying to get some additional info and we’ll update this if we learn more.

The owner of the salon where she was arrested said that she had just come in as a customer, and that they hadn’t met her before or didn’t have any other information on her. But they were very surprised to see police come into their place of business with guns drawn, and afterwards announced to their customers that “anyone else who’s wanted should leave now.”

UPDATE: 4:34pm – Mark Jamieson from SPD just confirmed that police had been on the lookout for a Silver Dodge 300 and a specific subject that might on board the vehicle with a possible connection to yesterday’s shootings. The woman is “not considered a suspect at this time”, but she is being interviewed by detectives working on the case. In addition, the vehicle was impounded based on information that it may have been associated with the shootings. Mark could not give any other details in the case such as the woman’s connection to the main suspect in the case, Rey Alberto Davis-Bell, nor how the car could possibly be of use in the investigation.

UPDATE: 10:24am Friday – The Seattle PI is reporting that this woman was released by police after questioning. 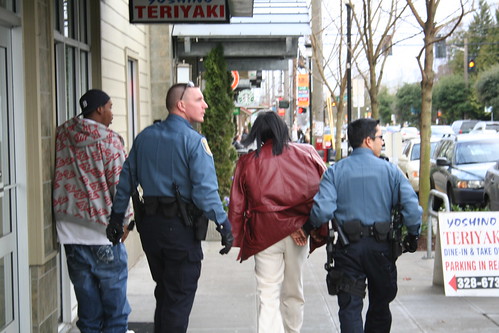 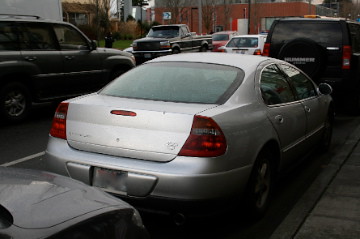