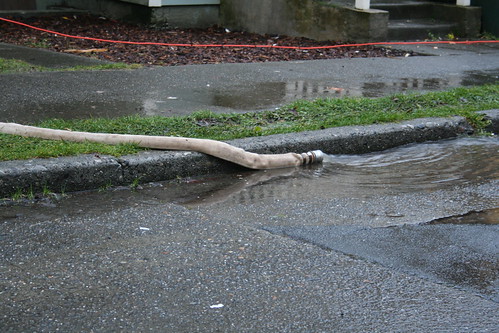 but luckily, so far, it hasn’t been as bad as anticipated. This weekend’s snow turned to rain and it has been steady since. We have yet to witness the high winds and the city’s drainage system has been able to handle the excess water. Widespread flooding has not been a problem, but there has been some isolated incidents in low-lying areas.

One home on 22nd and Jefferson had a large diameter hose extending from the house dumping a large amount of water onto 22nd Street. This is the same block that experienced several flooded basements in last December’s storm.

The area of Madison Valley that sustained severe flood damage and one drowning death last year seems to be doing much better now. The flood water reservoir has standing water in it, but it is no where near capacity. I saw city crews stationed in that area monitoring the conditions. King 5 reports that some neighbors in this area are experiencing flooding in backyards and basements.

Hopefully we will continue to have safe storm season.