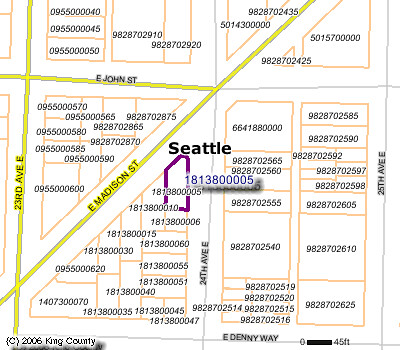 Even the slow holiday months have some development activity around the neighborhood. Here’s two new decisions released today by the Seattle Planning & Development Department :

First up is a death sentence for the old Seattle Box Style house on the corner of 23rd & Main, on the opposite end of the block from the Yesler fire station. It will be torn down and replaced by a four story, 13 unit apartment building.

The house was built in 1906 and has been used as offices since the early 90’s. Although I always hate to see a cool old house go down, the new development will fit in well with all the other construction going up around Jackson St.

The second decision will definitely be an improvement for the area, since it will take a blackberry-filled vacant lot at 24th & Madison and put in a live-work unit and a two-unit townhouse.