By now, most people have heard that CASA Latina will be moving their headquarters from Belltown to Jackson Place, specifically 17th and Jackson. This will happen in the summer of 2008.

So what is CASA Latina? Centro de Ayuda Solidara a los Amigos, or “The Center of Supportive Aid to Friends” is a day labor organization that provides Latino immigrants with employment and educational opportunities. They help unite workers and employers, and provide English as a Second Language classes, among other services. To learn more, see their website.

This has been a very hot topic for the members of the Jackson Place neighborhood. Rumors have been running rampant throughout the CD, with the most prevalent being that the majority of the Jackson Place residents are not in support of CASA, but that the JP community council board went their own route and welcomed them with open arms.

I attended the December meeting of the Jackson Place Community Council Monday evening and this topic was the main focus of discussion with both opinions being well represented. Of those in attendance it did seem that the majority of the neighbors opposed the move, while the board, although not unanimous, was in favor of CASA coming to the neighborhood.

It definitely seemed that a majority of the neighbors at this meeting felt that the city, the mayor’s office, and the Belltown neighborhood are “dumping” CASA Latina out of Belltown and downtown because of recent renovations and a surge in high priced condos and apartments into a more “blighted” neighborhood such as the JP. They seem to be offended that, if this conspiracy exists, these kind of opinions about JP are prevalent. They feel that JP is a residential area and that any form of a day labor organization is better suited for a more industrial area.

This mentality was met with quite alot of resistance with those in opposition using such language as “anti-immigrant” and “unamerican” to descibe these ideas. They seemed to be offended that Latino day laborers are being portrayed as “trashy”, “dirty” people that ruin any neighborhood that they come in contact with, when they are really hard working people just trying to survive in this country.

The fact of the matter is that CASA Latina is coming to JP whether they like it or not. The majority of the neighbors at this meeting understand this, but feel that the Good Neighbor Agreement (GNA) with CASA should not be signed because it is a meritless document, “without teeth”, leaving CASA with very little responsibility with monitoring those in their program. They also feel that there should be a neighborhood vote on whether or not to sign the agreement.

The board feels that it is too late for members of the neighborhood to organize a vote on this issue. They seem content in signing the document, but will further discuss this matter at the next board meeting Monday, January 7th Location TBA. Anyone may attend this meeting. JPCC website

To an outsider, like myself, it definitely appears that a majority of the neighborhood was left out of this process, although unintentionally. It seems that people waited too long to voice their opinion, and I am not sure that opinions six months ago could have stopped this move. To me, I think that the truth lies in between the two arguments. CASA Latina looks like an organization that is aimed at helping hard working people find much needed work. I feel that they will help many immigrants find work and establish a home here. Isn’t that what this country is about? Hard work and a sense of community? But I also think that there will be some isolated incidents of crime, panhandling, or other unwanted activity that will give this program a bad name and create fuel for some within the neighborhood to say, “See, I told you so!”. But, I hope that CASA lives up to all of its expectations and brings the established members of the neighborhood and the new guests together to make this great neighborhood even better.

So, friend or foe? How about froe.

What’s your opinion on this? Would you want a day labor organization moving in next door to you?? 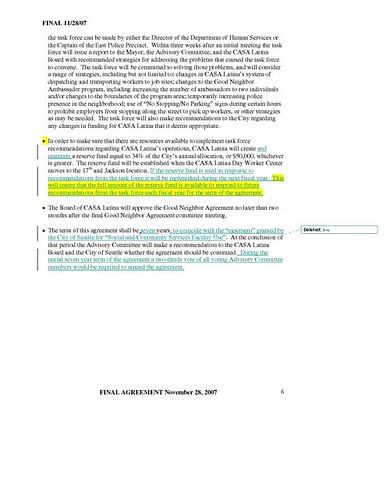