We the members of the United For Youth Coalition (UFYC) are requesting a meeting with you regarding the implementation of the Youth Violence Prevention Initiative. Responding to President-Elect Obama’s call for service we want to fully execute our responsibility as citizens by working with the city directly to effectively address the crisis in youth violence at the roots and be accountable for our role in the stewardship of public resources.

The current crisis of youth violence is the culmination of years of bad policy, insider dealing and government facilitated corruption that has disenfranchised and destabilized the African American community in Seattle. This is most clearly illustrated by the government facilitated co-opting of the African American Heritage Museum & Cultural Center from a community based institution to instill positive culture in our youth to a privately owned Urban League Village real estate development.

We are committed to working directly with government officials to solve the problem of youth crime in our city however we are expressing a no-confidence vote in the arbitrary appointment of the Urban League as coordinator of youth violence prevention network without community input. The Urban League is not a respected authority on addressing issues of youth violence in our community. A no-confidence vote goes to agencies that are not truly connected to our community and have failed to solve any of our problems, yet have received the majority of the resources to solve the problems.

-Restoration and expansion of funding Rainier Beach Central District Initiative and staff which successfully supported youth initiated violence prevention projects.
-The city to act in good faith regarding the implementation of Youth Violence Prevention Initiative, including more transparency and a community-based oversight committee for the initiative.
-Funding support for development of the UmojaFest PEACE Center, the new grassroots youth culture center in the Central District.
-A moratorium on public funding to the Urban League of Metropolitan Seattle until an investigation regarding their acquisition of Colman School is completed.
-Green Jobs not Jails. Employ youth to build communities via a Youth Community Safety & Development Corps.
-Partner with community-based organizations to take advantage of surplus capacity in the Seattle school district by developing programs to attract youth for extracurricular activities.

United For Youth Coalition is a growing network of community-based organizations, businesses and individuals committed to creating safer communities by recognizing and engaging youth as assets rather than liabilities. The coalition’s long term goal is development of a world class youth-focused African American Heritage Museum & Cultural Center.

Currently the coalition members are focused on developing the UmojaFest PEACE Center at 24th & Spring in Central Seattle. The center will feature audio recording and Video production studios, a youth violence memorial & Organic Garden, office space for community organizations and an outdoors stage. In addition the UFYC is also producing a series of Youth & Community Violence Prevention Forums titled “I choose Life…We Are Change” For more information the UPC visit www.umojafestpeacecenter.ning.com.

The organizations and members of the United 4 Youth Coalition embody a track record of successful youth development initiatives including:

The programming is being developed based on surveys of hundreds of youth from across Seattle. Youth expressed the desire for more positive outlets and programs. Our collective programming of the United For Youth Coalition member organizations provides culturally relevant strategy to prepare youth for the demands of an increasingly competitive global economy where persons lacking a global perspective and competencies in the areas of technology, finance, business and civic life frequently find themselves at a distinct disadvantage unable to enjoy the full benefits of society. The implementation of the programs under the umbrella of the United For Youth Coalition and UmojaFest P.E.A.C.E Center, specifically seeks to fill the void in effective services delivered to this vulnerable segment of our population.

We look forward to your positive response. 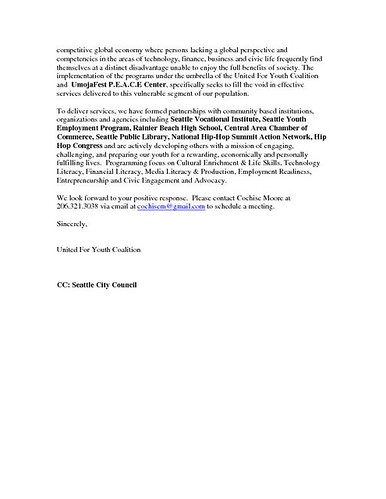