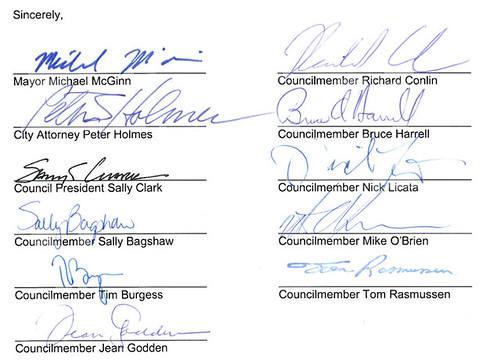 In a letter to the state Liquor Control Board signed by all nine City Councilmembers, Mayor McGinn and City Attorney Pete Holmes, city leaders ask the Board to reconsider a 2010 rule that could jeopardize Central Cinema’s family-friendly business model.

The letter says that Central Cinema (a CDNews sponsor) has been a “tremendous asset” in the city’s Safer Union project by creating a family-friendly destination in an area that has seen lots of drug and crime activity in recent decades. Seeing Central Cinema close “would be a terrible outcome,” they said.

The new rules were created without consulting or even notifying Central Cinema, which renewed its license twice since the rule changed without the Board mentioning it until recent months. While Central Cinema is not likely the target of the new rule, they could be caught up in it anyway.

“Their fear of Cinemas is based on their fear of a typical mall multi-plex installing beer taps next to the popcorn machine at the concession stand,” Central Cinema’s Kevin Spitzer told CDNews a few weeks ago. “I believe they just didn’t think the rule all of the way through.”

City leadership doesn’t think so either. They note Central Cinema’s six years of operation without incident and list several steps the theater takes to make sure servers can appropriately monitor alcohol consumption.

The city asks the Liquor Board to make changes to the rule that allow establishments like Central Cinema to continue operating, an outcome Spitzer prefers to the creation of a new state law as proposed by two Vancouver legislators. They also asked the Board not to enforce the rule until changes can be made. Budget cuts have slowed the Liquor Board’s rule change process significantly.

Below is the city’s letter to the Liquor Board. Let’s get a show of support. Comment below if you would sign this letter, too.