Here’s a quick roundup of a couple street robberies in the past week.

Two men robbed a man in wheelchair, knocking him to the ground in the process before fleeing. The robbers got away with the backpack attached to the front of the victim’s wheelchair. They even started rooting through it in front of the victim while he was on the sidewalk, the man told police. The victim was left with scrapes on his hands. 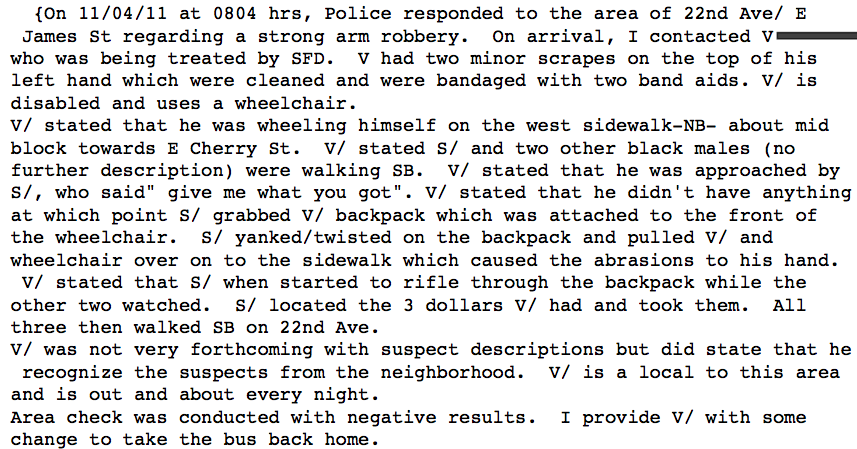 Three suspects robbed a woman walking down the sidewalk on 14th Ave near Alder. She was walking down 14th talking on her phone when one of the suspects asked her for the time. One suspect then grabbed for her backpack, causing her to fall to the ground. Another suspect tried to grab her phone, while the third may have been on lookout.

One of the suspects started screaming at her, telling her to give them her stuff, but she refused. She started screaming herself, drawing the attention of a neighbor who came outside and started walking toward the scene. The attempted robbers then ran off.

They did not get any of her stuff, and she was not injured. The suspects were described as follows, according to the police report:

10 thoughts on “Robbery Roundup: Man in wheelchair robbed, thrown to sidewalk at 22nd and James”