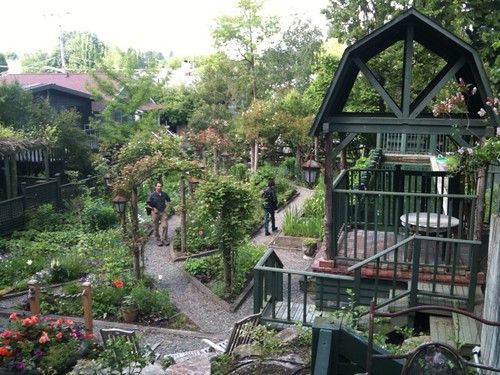 The annual Central Area Garden Tour is just a week and a half away, and the event is already getting some ink. The Seattle Times featured the garden of Virginia Wyman and Joe McDonnal over the weekend, highlighting the life of the late McDonnal in the process. McDonnel passed away last winter, but his garden flourishes on. It is just one of seven nine private gardens and seven public spaces featured in the June 4 tour.

A formal fountain dripping into a pool beneath an arching arbor sets the tone here. “The fountain is a present Joe gave himself from Paris,” says Wyman. Boxwood hedging, ferns and lily-of-the-valley surround it in textural layers of green, adding to the places’s slightly gone-to-ruin, European charm. The lines may be geometric, but most of the garden’s plantings are pleasantly chaotic.

McDonnal’s creativity and largesse of spirit permeate his beloved garden. In spring, it blooms purple and yellow with hundreds of crocus and daffodils; 26 double lilacs have grown into big, fragrant trees. Statuesque tree peonies with huge double blooms in white, pink and violet dominate the garden in May. The cottage garden is stunningly floriferous, with pastel roses, lilies, cosmos and columbines left to seed themselves all around. “This is what Joe would call ‘Hooly Balooley,’ “says Wyman of the garden’s orchestrated chaos.

Tickets for the tour are available at City People’s Garden Store, Central Co-op’s Madison Market, and Central Cinema. You can also purchase tickets online through Central Cinema, though you must pick them up from the theater in person. Tickets are $6 in advance or $9 the day of the event. The tour starts at 23rd and Union.

All proceeds go towards the Central District Public Art Project, which has been holding public meetings for the past couple months to gather input and generate ideas (see our previous story).

To get an idea of what the Garden Tour is like, here is our live-blogging of last year’s event.