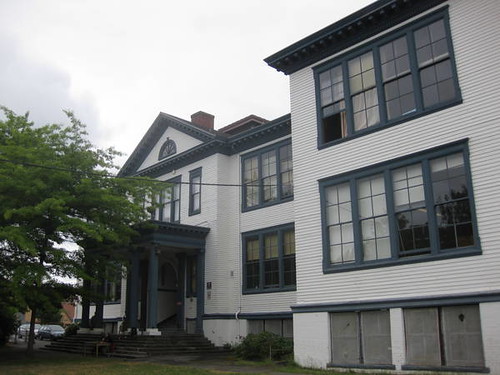 How is Nova Alternative High School doing in their “new” location, a year and a half after their move?

“The people you should be asking are the students,” said Dr. Mark Perry, Principal at Nova.  And so we did.

When the Seattle School Board voted to close numerous schools two years ago Meany Middle School, one of the smallest middle schools in the district, was slated to close.  At the same time Horace Mann School, once an elementary school which had housed Nova Alternative High School for decades, was deemed unsafe and unsound.  The district used this opportunity to move the Nova school from the Mann School building to the Meany School building, which it would share with the Secondary Bilingual School.  Mann was left vacant, its fate undecided.

Now, just as Nova is midway through their second year at the old Meany Middle School building, a nonprofit group has arranged to lease the Horace Mann School from the Seattle School District to start a school for at-risk youth, focusing on 16 to 21-year-olds who have dropped out of high school and would like to earn their diplomas and get their lives straightened out – and they’re using a $100,000 Seattle Department of Neighborhoods Grant to do it.  Volunteers joined forces with BEAN Seattle and the Work it Out project to make repairs to the building, and it is slated to open in January 2011.

But wait a minute… didn’t the district say the building was unsafe and unsound?

“They said it was not restorable, that it had not been maintained so it wasn’t safe. But who was it that didn’t maintain it? The school district.  They were the ones who were supposed to be taking care of it, and they didn’t.”  That’s the opinion of Nova High School student Carter Allen, who attended Nova school for two years at the the Mann building and is now in his senior year at the Meany building.

Though the Nova school was moved ostensibly to provide a safer school environment for its students, Allen said that wasn’t the case.  The Meany building also had structural and safety issues.  “The walls were not attached to the floors or the ceilings,” said Allen.  Additional safety concerns popped up, including chemistry labs with no running water – that meant no water for eye flushes, no water in the sinks, and no water in the emergency shower.

Those structural and plumbing issues were eventually addressed, but Allen said that there were many small inconveniences that made the transition from Mann to Meany difficult for Nova students.  For example, Meany was designed as a middle school, so Allen said that things were simply smaller than the high schoolers were used to – chairs, desks, lockers, restrooms.  Additionally, even with running water the chemistry lab equipment does not meet the technological standards of a high school curriculum, says Allen, because it wasn’t designed to.  Though Horace Mann had been originally designed as an elementary school, Nova had been housed there for so long that things like desks and lab equipment had been retrofitted for high schoolers.

Then there were the bells.  “We asked for them [the district] to separate the bell systems in the building” because Nova does not use bells to signify the end of classes, but the Secondary Bilingual School does.  Allen said that though they were assured the bell system would be adjusted for them before the school opened in September 2009 it was not, and though the district fixed it quickly in most of the classrooms some of them still had bells ringing months into the school year, which was a big distraction for teachers and students.

The architectural differences between the buildings has also affected the school dynamics.  Allen said that at the nearly 100-year old Mann school people were up or downstairs, but always easy to find and interact with.  In the Meany building its mid-century design means Nova’s approximately 300 students are housed in 13 classrooms in one long hallway. For Allen, it feels less connected.

Students we talked with say it was the sense of community that Nova faculty and students missed the most and are working hard to rebuild in their new home.  Students had painted murals and created art installations all around the Horace Mann building, and losing those was painful for students and teachers – but they are creating new art.  Nova students and faculty are doing whatever they can to stay positive and look forward instead of backward.  Allen said they didn’t want incoming freshmen and transfer students to feel like they missed out on anything by not attending school in the Mann building.  The first year it was discussed a lot more in terms like “old” and “new” because it was all so fresh, but now in their second school year in the Meany building, it comes up a lot less often.

Tammy Do, a senior at Nova, transfered from West Seattle High School after her sophomore year.  She never attended Nova at the Mann building, but said that she still senses anger from the other students and some teachers regarding the school’s move.  “It was a great loss in our community here at Nova,” she said.

Do chose to attend Nova when she realized that what she was learning in a traditional high school wasn’t being applied in her life outside of the classroom.  While the opportunity to shape her own education and “stretch [her] mind beyond what is just needed to graduate” really appealed to Do, she admits that her first year at Nova was challenging because it was so different.  Students are not forced to attend specific classes or do standard homework, but rather work with education coordinators to create a curriculum for themselves.  They have to be self-starters. She said, “motivation is very hard” for some teenagers, but that help was always available to her when she asked for it and she always knew she had a support network there to go to, and so she did.  Do is very happy with her decision to attend Nova.

For Carter Allen, news that the district would be leasing out the building his school had been forced to vacate was upsetting.  He said even now there are rumors circulating at Nova that the district plans to move the school again, which he hopes are false.  While it is wonderful to see the Mann building used for education again, it does make Allen feel as though Nova may have been cheated out of something.  Certainly this turn of events is bittersweet.

0 thoughts on “As Mann takes new, improved shape, Nova students wonder if they got raw deal”