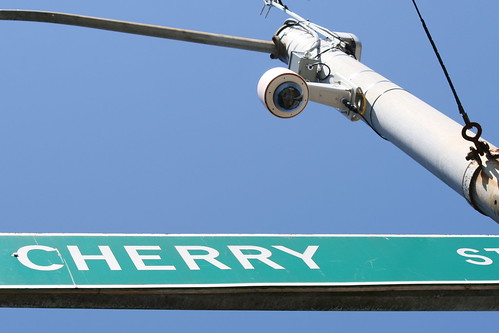 There’s a new police presence on 23rd Avenue near the Garfield Community Center, but it doesn’t involve any living members of the force. The city has installed cameras on utility poles and traffic signals in the area, giving East Precinct officers a whole new investigative tool – one that is already being used to help solve the most recent shooting that occurred there last week.

East Precinct Captain Paul McDonagh says that the cameras were installed as an initiative of the mayor’s office, focusing on city park properties that have a history of criminal activity. The area around the Garfield Community Center made the list after a series of high-profile shootings there last year, such as the one that killed Quincy Coleman and another that blinded Donnie Cheatham.

Although SPD does not have direct control of the cameras and does not monitor them in real-time, recordings are made and kept available for a limited time. SPD officials can then request access to those recordings for specific crimes they’re investigating, as they’ve reportedly done in the shooting incident on July 5th. Detectives in that case have requested the video from that time period and are using it as part of their ongoing investigation.

Captain McDonagh says that the recorded footage will typically only be used for major crimes such as assaults, robberies, and shootings. He hopes that they can provide small clues to help larger investigations, such as capturing the license plate of a fleeing vehicle, or the face of a suspect that is already known to police.

Legally speaking, city prosecutors tell me that any criminal act that happens in public is fair game to this type of surveillance system, as there is no expectation of privacy when someone is out on a public street. However, the law would not allow them to be fixed on a private property to capture illegal activity that might happen inside a house or fenced yard.

An SPD officer has told me that they think the cameras are already having an effect on the area, saying that gang members have noticed them and appear to have taken their activity to other places. If you’re wondering how that could be with the incident just last week, it’s possible that the assailants in that case were from a different neighborhood and not aware of the camera’s installation on that corner.

A previous installation of cameras at Cal Anderson Park on Capitol Hill created a minor uproar among city council members due to the fact that they didn’t specifically provide for them in the city budget. We made several calls to councilmembers and various city departments to get the specifics on how these were funded and whether they fall in that same category, but so far have not heard back. We’ll let you know if we do.