At 3:40PM a man was shot in the leg at 24th Ave S and S Lane St. He is alert and conscious. The suspect is wearing a yellow jacket and is driving a silver Cadillac sedan with three passengers last seen heading Southbound.

This all started with a call to 911 reporting that several kids were hiding from a gunman in Red Apple at 23rd & Jackson. When police arrived, they were flagged down by a witness in the parking lot who reported seeing a man with a gun in his waistband who got into a black Impala and drove away to the south.

A search of the area found that Impala about one block away at 24th & S. Lane, where police found one occupant with a gunshot wound to the leg. Medics responded to the scene and were seen to be applying bandages to what was apparently a relatively minor wound.

It appears that he was shot around the corner in the 500 block of 25th Ave S.  Police were collecting spent shell casings and projectiles from the area in front of a house in that block.

Witnesses reported the shooters as being associated with the silver Cadillac, which was spotted by officers and stopped in the South Precinct at Rainier & S. McClellan.  The witnesses were taken to that location and provided a positive ID for the vehicle and one suspect, described as wearing a yellow jacket. That suspect was taken into custody by police and taken to the East Precinct for further questioning and investigation.

The scanner traffic indicates that there are a total of three parties involved here:  the kids in Red Apple, the victim and his associates, and the suspect(s) who were stopped down South.  Reportedly one of those groups contains known members of the 74 Hoovers gang from South Seattle, but it’s not clear which at this point.

Update: 3:55PM A silver Cadillac has been stopped at Rainier & McClellan and four men are being detained, the driver is wearing a yellow jacket.

Update x2:  by scott at 4:05pm – I just got back from the scene where the victim was being treated for his wound. Police also appeared to be looking for shell casings one block over on 25th, just a couple of houses north of the intersection with S. Lane.  There were two other occupants of the victim’s vehicle who were being searched by police.

Update x3: Police are finding spent projectiles and shell casings in the 500 block of 25th. 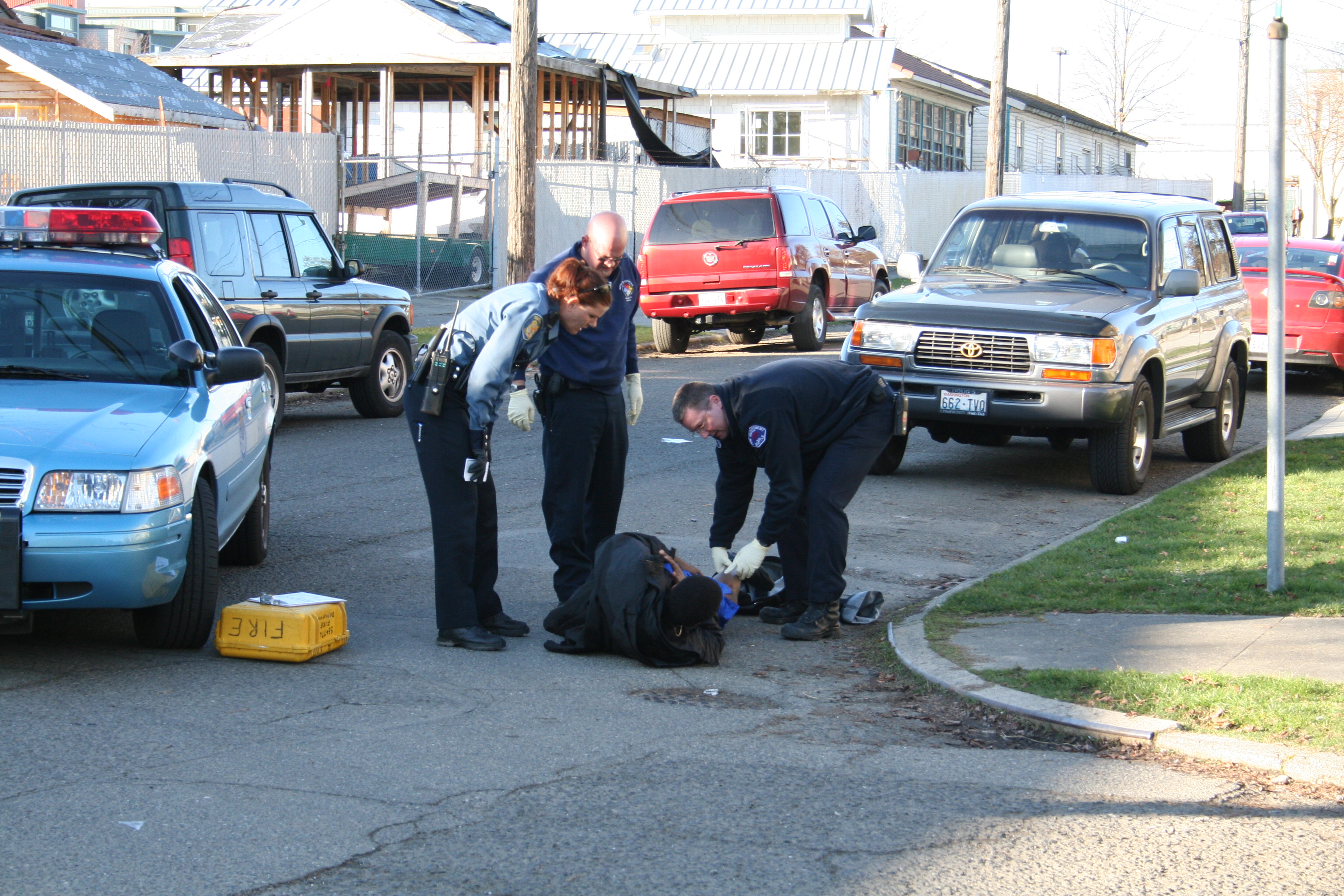 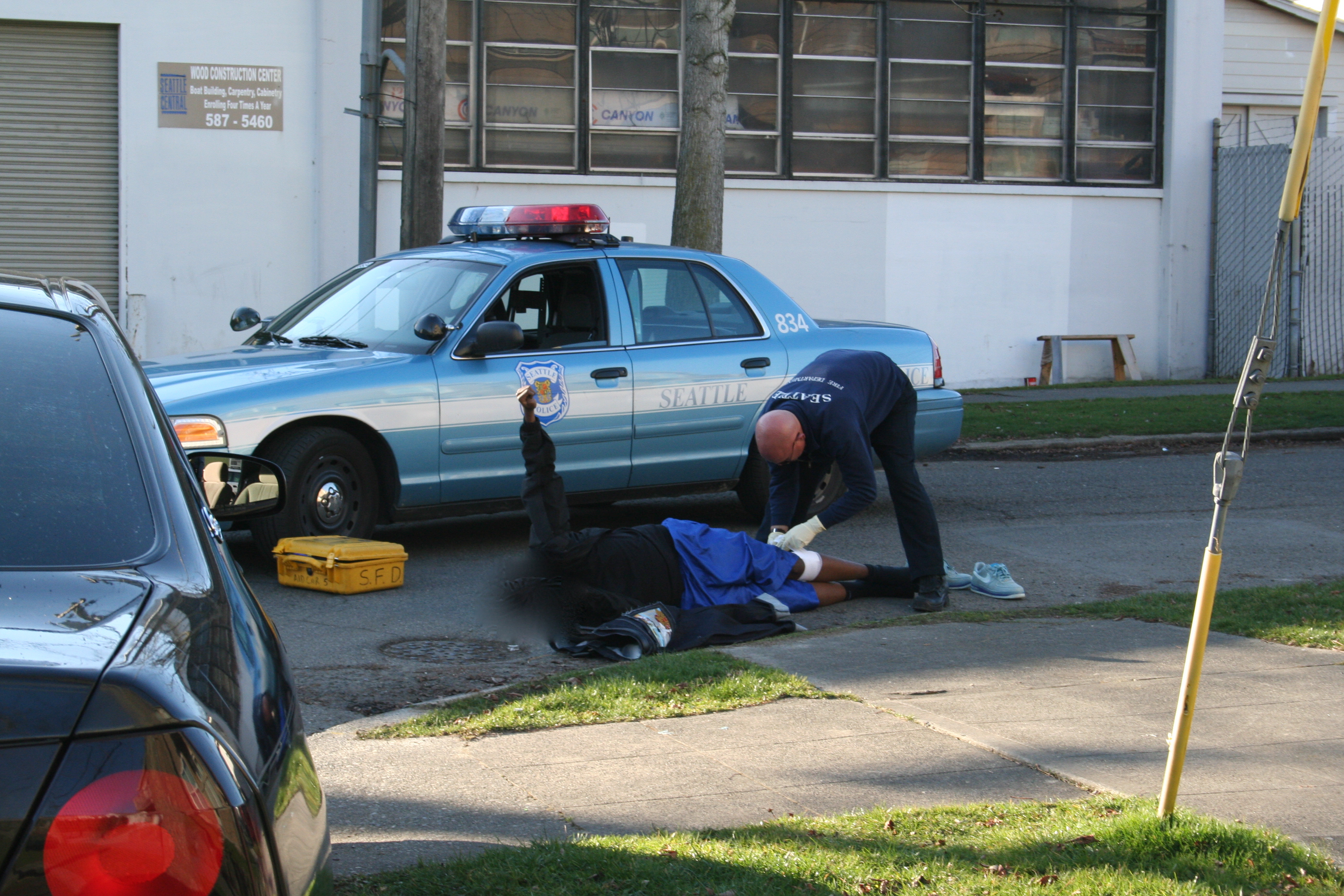 Update x4: Here’s a blurb from SPD’s blotter with a few new details:

On February 27th at approx. 3:39 P.M., an employee of a store in the 2300 Block of South Jackson, called 911 and reported that several teenagers were in the store hiding from someone outside with a gun.  As East Precinct officers arrived several gunshots were heard from the east. Officers located the male victim in the 500 block of 25 Avenue.S.  The victim sustained a non life-threatening gunshot wound to the leg.  A suspect vehicle description was given as a silver Cadillac occupied by several black males.  Officers observed the suspect vehicle at Martin Luther King Jr. Way South and South Graham Street.  The suspect vehicle was eventually stopped at Rainer Avenue South and South McClellan. Four occupants were contacted and placed into custody.  The suspects were transported to the East Precinct where Gang Unit detectives conducted interviews.  Subsequently, the interviews verified the location of where the suspect hid the handguns after the shooting.  The Gang Unit with the assistance of East Precinct Anti-Crime Team  and SWAT served a search warrant at a residence in the 2500 Block of  South  Norman Street. Both handguns used in the shooting were recovered along with numerous other ammunition.  Three of the suspects were booked into the King County Jail, and another was interviewed and released.  The Seattle Police Department’s Gang Unit is conducting this investigation.